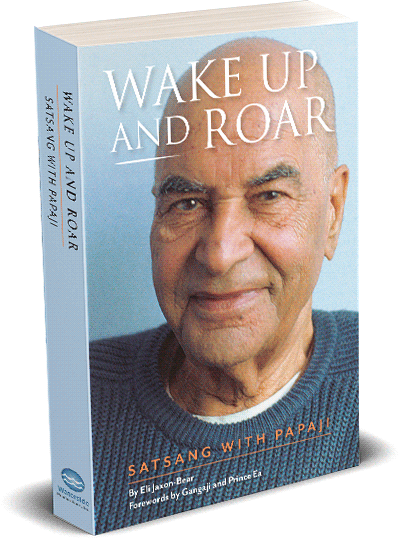 Wake Up and Roar is Papaji's direct transmission, revealing the possibility of immediate self realization.

New 3rd edition of the spiritual classic
by Eli Jaxon-Bear

"Now I see why people write to me that they wake up from just reading this book!"

Known to the world as Papaji, Sri H.W.L. Poonja introduced Satsang to the West. Eli Jaxon-Bear, who met Papaji before he was well known, set out on a mission of spreading Papaji’s name and teachings to everyone: Wake Up and Roar: Satsang with Papaji is the profound result. It continues to thrive as a living teaching awakening truth seekers with authentic and grounded wisdom from this great, beloved modern Sage. Read the book that continues to impact spiritual seekers around the world.

Now for the first time, the book is available in audio format; narrated by Eli Jaxon-Bear (the voice of Papaji), and Prince Ea (as the student).

Wake Up and Roar offers the reader an opportunity to awaken, here and now, regardless of your background, religion, spiritual practice or circumstances. Blending humor, logic, and illuminating storytelling, Papaji extends his gracious wisdom that speaks to the earnest truth seeker investigating the nature of mind, and addresses practical and esoteric questions such as how to be in this chaotic world and still find peace.

Listen to Prince Ea's audio foreword to the book here:

"A series of spiritual conversations led by a teacher of enlightenment. Wake Up and Roar is reminiscent of Socratic dialogues, it covers a remarkable swath of philosophical ground, discussing such things as the nature of true freedom and enlightenment, the distinction between nirvana and samsara, meditation, love, and death. The thematic twine that holds it all together, though, is the goal of emptiness—a transcendence of dualistic conceptualizations that create the illusion of the separation of the self.

Poonja is shown to be a truly gifted and charming teacher, and the dialogues repay careful attention. The whole book is a fount of provocative wisdom."

In a brief biographical segment, we learn that Poonja (1910-1997) was the nephew of Swami Ram Tirtha, noted Indian poet and teacher. He had spiritual leanings from childhood, and in later life was contacted for guidance by individuals who knew of his relationship with the great master Bhagavan Sri Ramana. The book’s editor, Eli Jaxon-Bear, and his wife, Gangaji, who wrote an eloquent Foreword, are American spiritual seekers who, in 1990-91, tape-recorded intimate group meetings, or satsang, with Poonja, known as Papaji. The text of Wake Up and Roar is not a literal transcription but is based on these recordings.

Papaji’s talks, which took place in his house in Lucknow, are arranged here by topic, not chronology, with chapter headings such as “Who Are You?”; “Practice and Meditation”; “Desire”; Realization,” etc. He is revealed as a spontaneous, eclectic teacher who advised his followers to detach from worldly desires. His unnamed visitors pose questions; Papaji answers them directly. For example, when a listener asks if he can stay and serve Papaji, the master answers, “If you don’t know yourself, what help can you be to another?” He can also be amusing. A physician asks whom he should serve, and Papaji unhesitatingly responds, “Patients.”

Some may relate Papaji’s interactions to the “hard sayings” referred to by Jesus; others may be reminded of the mystical pronouncements of the Zen masters. To the uninitiated, Papaji’s responses may sometimes seem like rebuffs but are framed to help the aspirant think and, paradoxically, learn not to over-think spiritual dilemmas.

Papaji died in 1997, leaving no writings for study by later disciples. These annals, filled with his quiet wisdom, offer a glimpse into his philosophy and method of interacting with his devotees. They are sure to be appreciated by his followers and perhaps new devotees as well.

Also available as an Audio Book and ebook." 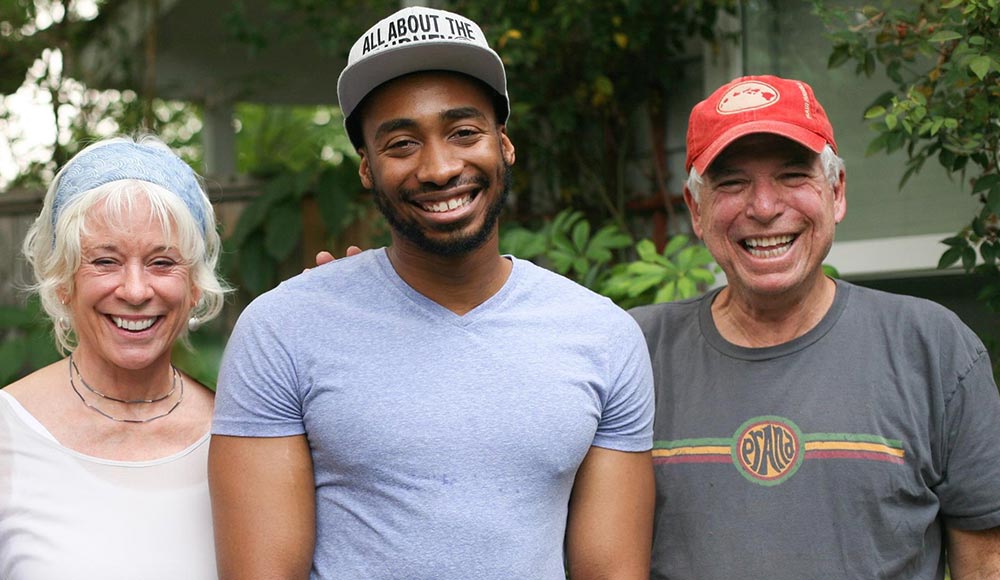 "Papaji's words are signposts merely pointing. It is up to you to come into direct experience with the truth, it is up to you to 'Wake up and Roar.' The fact that you have found this book or it has somehow found you, means that you are being led by Grace. I urge you to go all the way with an open mind and an open heart."

THE SEARCH FOR A FULLY SELF-REALIZED TEACHER: A SLIDESHOW OF MEETING PAPAJI 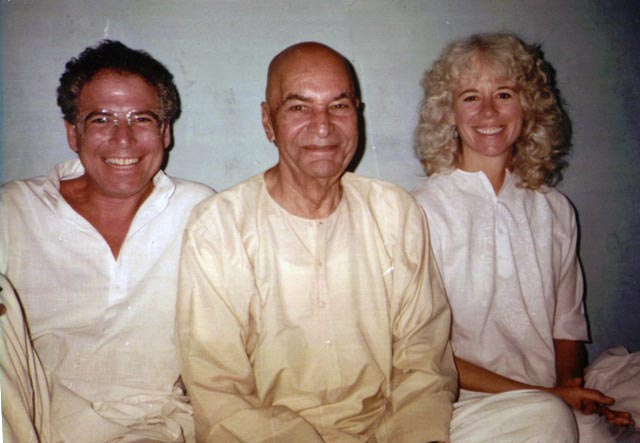 After an 18 year search through all the major spiritual traditions and teachers, in 1990 I landed in Delhi in my search for a true teacher. This slide show was shot as I searched until finding a living Buddha in Lucknow. I narrate as I take you on the journey through India to the final meeting with Papaji, a then unknown teacher in the West.

Wake Up and Roar reveals the final truth of how to realize yourself and live a life of fulfillment and love.

We have created a short video of never before seen footage that is only available here.

Before Eli brought a video camera with him to India, there were no audios or videos of Papaji’s satsang. This video contains never before seen footage of Gangaji, when she was still Toni, walking along the River Ganga on her way to her first meeting with Papaji; Eli asking Papaji a question from behind the camera at Papaji’s home, and Gangaji’s final question to Papaji, in satsang beside the river Ganga (where he calls her Miss Toni). It also includes a private meeting with Papaji at his dining room table in Lucknow, as he gives Gangaji a teaching that is never spoken in public.

It is truly beautiful to witness both Gangaji’s and Eli’s love for their teacher in these rare clips.

Please sign up and we will send you an email for accessing the video. Your email will never be shared with anyone. 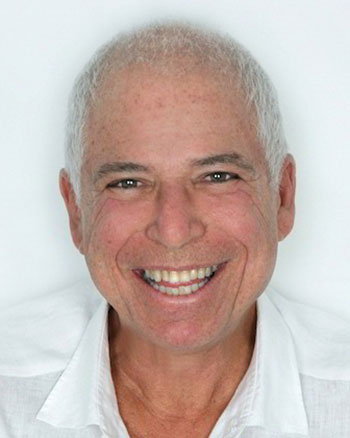 After a search took him around the world and into many traditions and practices, Eli Jaxon-Bear’s path and his search ended when he was pulled to India in 1990, where he met his final teacher, Papaji. Confirming Eli’s realization, his teacher sent him back into the world to share his unique psychological insights into the nature of egoic suffering in support of selfrealization. Eli infuses the teaching with his teacher’s living transmission of silence. He presents a unique map of egoic identification as a vehicle for ruthless self-inquiry and final realization of true freedom. He dedicates his life to passing on the transmission of his teacher. Eli currently meets people and teaches through the Leela Foundation, a non-profit organization dedicated to world peace and freedom through universal self-realization. 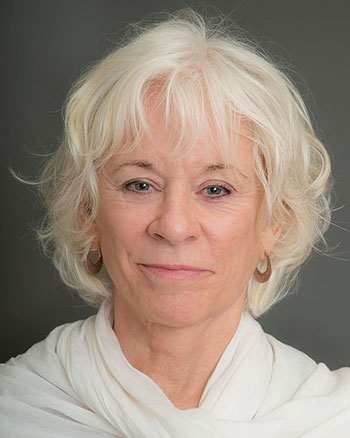 Gangaji is an internationally renowned teacher and author dedicated to sharing a path of freedom through self inquiry. In 1990, the answer to her final prayer for true help came unexpectedly, taking her to India. There on the banks of the river Ganga, she met Papaji, who opened the floodgates of her self-recognition. Today, Gangaji travels the world speaking to people from all walks of life. She powerfully articulates how it is possible to directly experience the truth of who you are and in that, discover true peace and lasting fulfillment. Her books include: The Diamond in Your Pocket: Discovering Your True Radiance; Hidden Treasure: Uncovering the Truth in Your Life Story; and You Are THAT! Satsang with Gangaji. 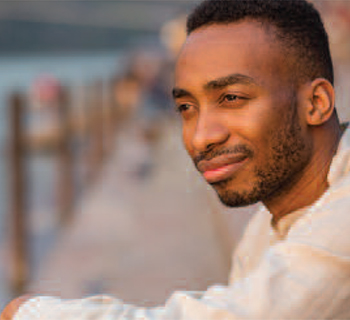 Prince Ea is a Poet, Philosopher, Filmmaker, Musician and social media phenom who has touched the hearts, minds and souls of millions of people worldwide. His work has been featured on Oprah and has accumulated over 500 million views on Facebook and YouTube alone. Prince Ea is devoted to growing and informing the world through the power of Love, as he believes it is the answer to every problem facing the planet today. He continues to spread that message through his authentic voice and original content.

ORDER WAKE UP AND ROAR NOW