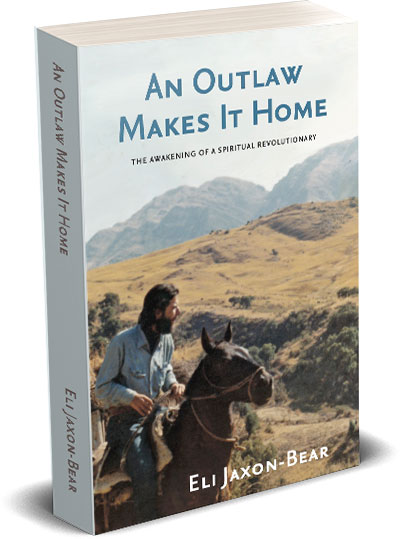 An Outlaw Makes it Home: The Awakening of a Spiritual Revolutionary

Can sex, drugs and revolution lead to a life of true love and lasting fulfillment? An Outlaw Makes It Home answers this while showing us the tests and traps along the way that each of us must meet in life.

An Outlaw Makes It Home is an odyssey, a journey out and a return home. A candid, compelling and raucous spiritual adventure story, with an element of danger when Eli goes underground as a federal fugitive during the Vietnam War. From underground revolutionary to spiritual awakening, he takes us with him from uncharted outback of Peru to a monastery in Japan, an initiation into a Sufi clan in Marrakesh, and the streets of India in his quest for a final teacher.

"An Outlaw Makes It Home bares it all.... I consumed this book in huge gulps and would do it again. I urge others to read it."

Synopsis: Can drugs, sex and revolution lead to lasting fulfillment and love? This memoir by Eli Jaxon-Bear, framed as a teaching story, using Joseph Campbell's model of the hero journey, answers this question in an exciting, funny and deeply personal memoir.

From being attacked by possemen on a civil rights march in Alabama to becoming a federal fugitive in a cabin in Colorado, Jaxon-Bear's life then leads us to the uncharted Andes, a Zen Monastery in Japan and a Sufi initiation in Morocco. We are taken on a roller coaster adventure of discovery in the search for freedom and finally finding true love and fulfillment. We see the tests and challenges that confront all of us as we navigate through life in the search for happiness.

"Eli Jaxon-Bear's An Outlaw Makes It Home: The Awakening Of A Spiritual Revolutionary is a very unusual memoir, a long running quest for spiritual enlightenment through the rebellious sixties, when so many young people sought their own paths through life, rather than what they felt was ordained for them by parents and society.

Jaxon-Bear's path is a wild one, by any standard. His memoir opens in 1971 as a federal fugitive, hiding out in a Colorado wilderness cabin, expecting at any moment to be confronted by officers of the law. How did he get there from being 'a twenty-something, upper middle-class, nice Jewish boy from New York, a year removed from a fellowship in a doctoral program'? It's an engrossing, and at times disturbing account.

He talks about the early experiences that made him avoid 'a successful superficial life' and aim for a 'short, fast life' like Alexander the Great. He admired his Uncle Jack, who was the real deal wise guy. He speaks of the influence of Bob Dylan's 'the times they are a changin'. He smoked marijuana and in 1965 marched with the SNCC in Alabama where a Klan attack 'permanently shattered' his vision of America.

He joined the domestic peace corps to avoid the draft and gradually became more radicalized, turning his back on society. He marched against the Vietnam War. He dealt drugs for a living, was arrested several times, but somehow avoided jail time. He got his name from an Apache after sharing magic mushrooms. He tells us of seeking enlightenment in Peru, searching for 'a secret brotherhood in a hidden monastery' east of Cusco. He didn't find it, though the quest almost killed him.

Back in America he grew marijuana in a hippie commune. He met Toni and his life came into focus. He started a business selling tribal rugs; taught neurolinguistics; and continued to pursue spiritualism. Finally he found the teacher he had long sought, Papaji in India. Having lived through the sixties, I enjoyed reading of his tumultuous journey, and am very glad that he survived it!"

“The author’s uninhibited, honest account of his life—with all of his flaws on full display—is refreshing…an intriguing and candid memoir.”

"An Outlaw Makes It Home bares it all in this machine-gun like compilation of adventures. A serious, playing-for-keeps quest for spiritual wisdom and enlightenment with a startling turn in the heartwarming discovery after an eighteen year search. Jaxon-Bear does not spare himself or try to polish his flaws and mistakes: in that regard, he is a warrior. I consumed this book in huge gulps and would do it again. I urge others to read it."

~Ed and Deb Shapiro, authors of The Unexpected Power of Mindfulness & Meditation

"An Outlaw Makes It Home, can be seen as a coming of age story, a modern journey of self-discovery but it is a classic hero’s journey, an odyssey, a journey out and a return home.

What a journey, and what a home! Eli takes us from a shattering moment in a Brooklyn childhood through radical and sometimes terrifying times in the 60’s, being literally outside the law, escape to Peru, lots of drugs and women, Japan, Morocco, India, learning to be a farmer of sorts back home in the US.... all the way to waking up and discovering what home truly is.

His honesty about fear and failure are very moving, but what really shines forth from these pages is a fierce love and commitment to the truth.

I absolutely loved An Outlaw Makes it Home!"

"I couldn’t put it down. A raw, honest and heart opening account of a love-warrior's journey through chaos and rebellion into enlightenment. I highly recommend this book to everyone. It brings us on the journey from the 60s rebellion to 21st century consciousness transformation. Bravo Eli!"

"AN OUTLAW MAKES IT HOME: An inspiring adventure story, taking us from the mountains of Peru to the streets of India on a breath-taking search for enlightenment."

"I'm blown away by this magnificent life journey!--that you were never to be held back by anything, period. I was shown, in many passages, how I regularly accept lesser versions of myself instead of pushing through those points that need to be transcended. Thanks for all the lessons, insights and anecdotes."

"I am awed by his mythic journey of self exploration towards awakening. Eli relentlessly pursues justice, challenges his traditional teachings and constantly follows the sacred path of the spiritual seeker.

A true Godwrestler of the Yehudi tribe, I bow to Eli for declaring and living his truth: “Any path can lead home. It is the heart of the seeker not the path that is important.” This book is a fast moving page turner, alive and exciting. I applaud Eli’s honesty, drive and natural story telling ability."

In this interview, Eli takes us through the start of his journey in Montgomery, Alabama in March of 1965. 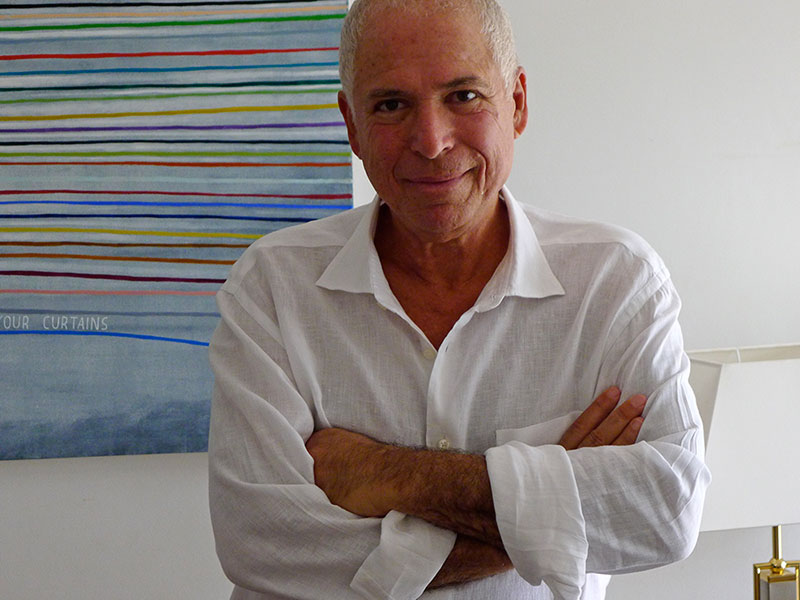 Eli Jaxon-Bear is the author of Wake Up and Roar; Sudden Awakening and From Fixation to Freedom. He has worked as a mailboy, dishwasher, steel-worker, teacher and organic farmer. He was a community organizer with VISTA in Chicago and Detroit and was in a doctoral program at the Graduate School of International Studies in Denver, Colorado. He has been living with his partner and wife since 1976. They currently reside in Ashland, Oregon.

Eli meets people and teaches through the Leela Foundation.

Sign up for the New Morning Books mailing list to receive advance notice about new publications, special offers and more. Your email will never be shared with anyone.